This recipe was inspired by an original post at Half Baked Harvest. Whether you have family coming over this holiday season or just relaxing on the couch next to a fire, this old fashioned recipe is sure to please your taste buds, while impressing your buds.

The flavor is sweet, spicy, and delicious and when mixed adds a really nice aroma to the home for the holiday season.
I found myself making this cocktail for snowy nights when sitting next to our indoor wood fire stove. It makes a good drink for the entire season, but hits an additional note while there is snow on the ground.

You can also make this into more of a punch for serving guests. If doing so, I would probably recommend doubling the recipe, depending on how many people you plan to serve…or if you just know your guests will be back for seconds. The recipe is rather simple and easy to make once you have all the ingredients, we have also provided the links to our favorites within the recipe. You simply combine all the honey syrup ingredients and then boil them for 5 minutes. Then let it cool and mix it in with your old fashioned. Be sure to make enough for everyone though as this recipe is for 6 cocktails.

The Pendennis Club, a gentlemen's club founded in 1881 in Louisville, Kentucky, claims the old fashioned cocktail was invented there. The recipe was said to have been invented by a bartender at that club in honor of Colonel James E. Pepper, a prominent bourbon distiller, who brought it to the Waldorf-Astoria Hotel bar in New York City. Cocktail critic David Wonderich finds this origin story unlikely however, as the first mention in print of "old fashioned cocktails" was in the Chicago Daily Tribune in February 1880, before the Pendennis Club was opened; this in addition to the fact that the old fashioned was simply a re-packaging of a drink that had long existed.

With its conception rooted in the city's history, in 2015 the city of Louisville named the old fashioned as its official cocktail. Each year, during the first two weeks of June, Louisville celebrates "Old Fashioned Fortnight" which encompasses bourbon events, cocktail specials and National Bourbon Day which is always celebrated on June 14.

When this old fashioned recipe is made, just shake it up with bourbon, lemon, and a squeeze of fresh orange juice, it’s sweet, spicy, and delicious and an easy way to keep these gourmet drinks coming.

The Recipe is 2 parts, the syrup you will make, and then the old fashioned it is mixed with. 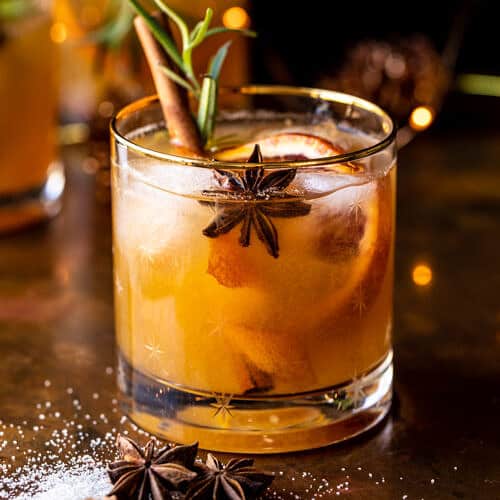 If you are making this holiday cocktail for family and friends, be sure to at least double the recipe. I will normally make a 3X recipe for my family that has 6 of us sipping on it throughout the holidays.